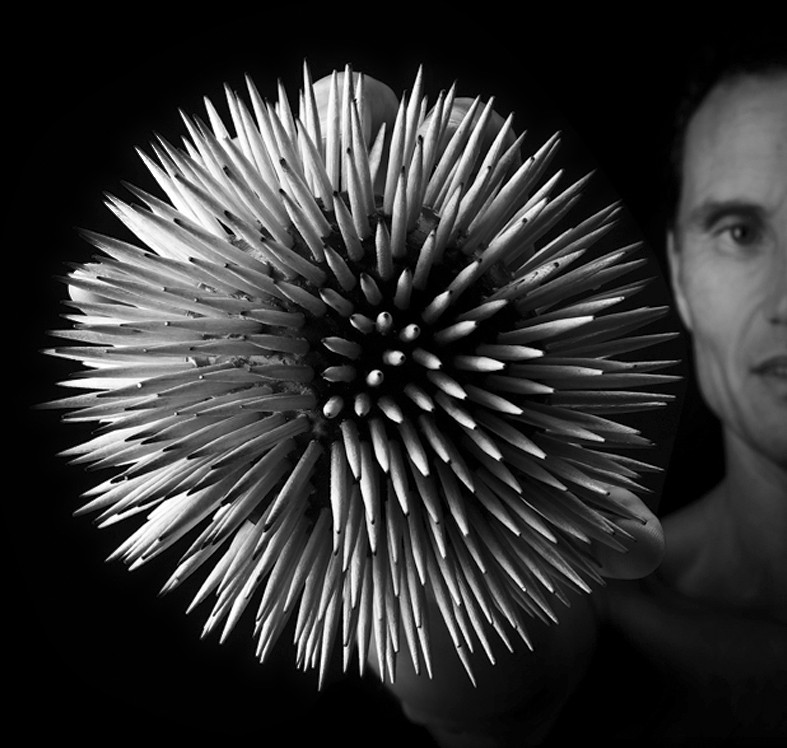 1 URCHIN 365 SPIKES. A STORY A DAY. EVERYDAY. SPIKE YOUR BEST MOMENTS IN LIFE

Anyone who has ever crossed with these wild and prickly balls knows they can leave marks behind. Intensive ones. The violent pain of a spine that bores into the foot; the indescribable pleasure when holding this unique being in our hands; the exotic taste when eating it. The sea urchin is full of 'chemical traps' like anandamide a cannabinoid neurotransmitter that activates the production of dopamine in the brain. The result: sense of pleasure! An addictive one ... There are 950 species of sea urchins in all oceans and at several depths - from the shore line up to 5000 meters below the sea level. It’s a creature that is both universal and local. It is ours and it is 100% Portuguese. Sometimes we need to get spiked to get reminded of what really matters in life. Let yourself get stung by this piece of Portugal and take with you memories to relive every day.

A single step into the water, a thorn bores into the foot, a moment of pain and ... much more. The shock, the rough contact with the spine and the pain caused give way to other feelings when looking below the surface. Down there, under the water is a unique being, a ball covered with spines. When it touches us it can reach out to our soul. It freezes a tiny piece of time, enough to make us stop and often re-order our priorities in life. A sea urchin sting can also have this effect on us. It’s the voice of experience speaking…

Below the thorny armour hides an elaborated chemical laboratory producing substances that let us doubt how to interpret the sting: Pain? Or pleasure? The anandamide causes doubt. This chemical is a cannabinoid neurotransmitter able to trigger the production of dopamine in the brain. Where is it leading to? A feeling of pleasure. And yes, it can be addictive. Pleasure can be extremely addictive...

There are about 950 species of sea urchins around the world. They can be found in every ocean and at depths ranging from the shallow coastline to the abysmal 5000 meters below sea level. The sea urchin is universal - it can be found in every ocean - but is local at the same time. There are so many species that uniqueness is guaranteed in all geographies. The sea urchin, which inspired the development of UNI, is only ours and 100% Portuguese. Raunchy (-> melhor usar “Crude”?), ready to sting and leave its mark, the mark of Portugal. This is the element that triggers the memory of a unique and unrepeatable moment.

What inspired the creation of a wooden sea urchin? It happened exactly a year and a half after a sea urchin sting me during a long surf session in the waves of Ericeira. If the spines are not removed immediately - and they were not - they go deeper and deeper, down to the bone. They stay for months, until they are rejected by our body. Only after 18 months - the sting mark disappeared. Months later, again during a surf session, a new sting triggered the memory of that long period the sea urchin spine remained deep in my foot. It was an intense sting that awakes (or “lingers on” instead of awakes) memories and leaves a deep mark. This could well be the symbol of Portugal, a symbol which contains the essence of the country. A curious and singular object able to 'poke' people and plunge “Portugality” in their bodies and minds for months - 12, in fact. Or a year. Or 365 days, as many as the spines that UNI has.

The first objective was to figure out how many spines a sea urchin has. Hundreds! But how could we ensure that the wooden reproduction approached the real picture? 100 spikes? It did not work ... 200? It was still far away from reality. But with 300 spikes the image began to gain personality. And if UNI fits 300 spikes, it could fit 365. And that’s how the idea of having a spine for each and every day of the year was born.